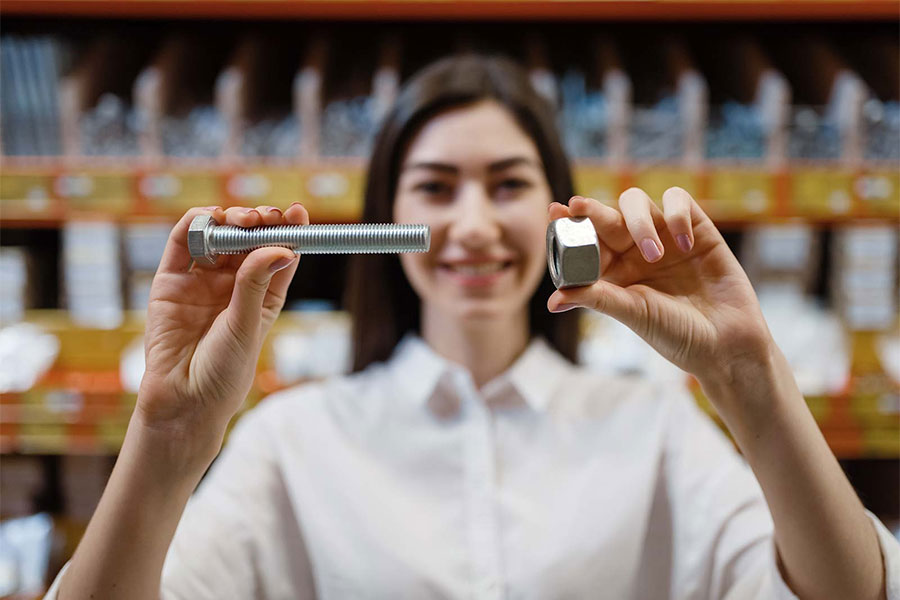 When looking at the head of a bolt, there are six details that can be told by them: the type of fastener (or drive type), the grade (or classification) of the fastener, the manufacturer, the material type, the plating or coating and whether it is an Imperial fastener or a Metric fastener.

These details can be broken down into various groups called Grades or Classes that classify them according to their property ranks, quality, degree and other various facets. According to Imperial (SAE) and Metric specifications, as the grade and class of the fasteners increase, so do that of the bolt’s tensile strength.

The grade/class of a bolt and it’s manufacturer are identified on the head. Lines varying in number in different positions and numbered markings determine grading / class. The basic rule of thumb in determining the grade is to count the number of lines on head of the bolt and add two to that number. E.G. A grade two bolt won’t have any lines upon it, add two and you have a grade two bolt. A grade five bolt will have three lines upon it, add two to that number and you have a grade of five and so on. Metric bolts are more direct in specifically marking their class ranks upon them. E.G. A class 8.8 bolt, a class 10.9 bolt and a class 12.9 bolt are clearly marked as such.

A Grade 2 bolt is the softest grade of steel bolts. There are no markings on the head.

A Grade 5 bolt can be identified by the three lines. Grade 5 is heat-treated. It is made of medium carbon steel, quenched and tempered.

A Grade 8 bolt can be identified by the six lines. It consists of medium carbon alloy steel, heat-treated, quenched and tempered. It is a hardened bolt.

A Grade 9 (or L9) bolt generally doesn’t have an industry standard in specification of its head marking and therefore the design is solely up to the manfuacturer. However, the head does usually have nine dots or lines upon them. This type of bolt is design for use within high-stress and high-strength applications.

A Class 8.8 bolt can be identified simply by the numbers 8.8 on it. Class 8.8 is heat-treated. It is made of medium carbon steel, quenched and tempered.

A Class 10.9 bolt can be identified simply by the numbers 10.9 on it. It consists of medium carbon alloy steel, heat-treated, quenched and tempered. It is a hardened bolt.

The important thing to keep in mind is correctly assessing the type of bolt for the job at hand. Sometimes asking for the “Highest-tensile bolt available” doesn’t necessarily correct any problems you’ve been experiencing if you suffer sheering of your bolts. As you increase the tensile strength of the bolt, increasing it’s stretching capabilities with each grade, the material of the bolt is increasingly more brittle and prone to side-ways pressures. At times, it is beneficial to reduce the tensile strength of the bolt if you experience sheering to prevent it from sheering (snapping in simpler terms) and allowing it to bend slightly, though still remain within one piece.